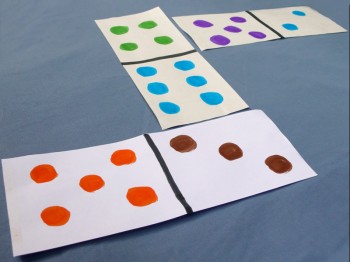 A fun way to practise adding numbers to 12.  Using the familiar picture patterns of dominoes, students match ends of two paper dominoes, saying “3 plus 6 equals 9”.  Teacher models reusing photocopy paper, cutting sheets in half lengthwise (hot dog way) beforehand.  Students can fold them in half, drawing a black marker line on the fold, then using domino examples to make number patterns with bingo dabbers on each side of the domino (numbers 0 to 6).  Students love making and playing this game. ** Older students could simply print double digit numbers on each end, adding or subtracting them in their heads as their game.

How did this work for you? We'd love your feedback